A. Deduplication is not compatible with encryption
B. The exports are being stored on smaller SAS drives
C. Encrypted files are much larger than unencrypted files
D. The SAN already uses encryption at rest

Explanation:
Encryption adds overhead to the data which results in and increase in file size. This overhead is attached to each file and could include the encryption/decryption key, data recovery files and data decryption field in file header. As a result, requires increased storage space.

A security administrator is given the security and availability profiles for servers that are being deployed.
1) Match each RAID type with the correct configuration and MINIMUM number of drives.
2) Review the server profiles and match them with the appropriate RAID type based on integrity, availability, I/O, storage requirements.

Instructions:
• All drive definitions can be dragged as many times as necessary
• Not all placeholders may be filled in the RAID configuration boxes
• If parity is required, please select the appropriate number of parity check boxes
• Server profiles may be dragged only once 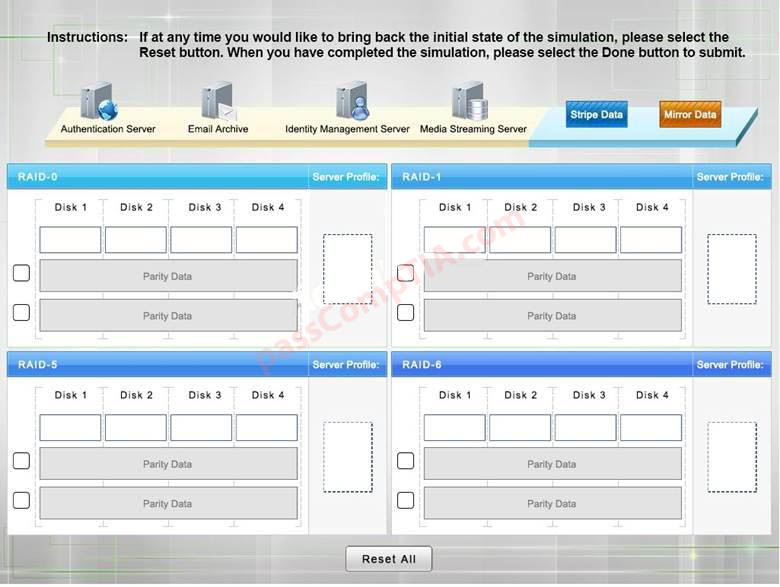 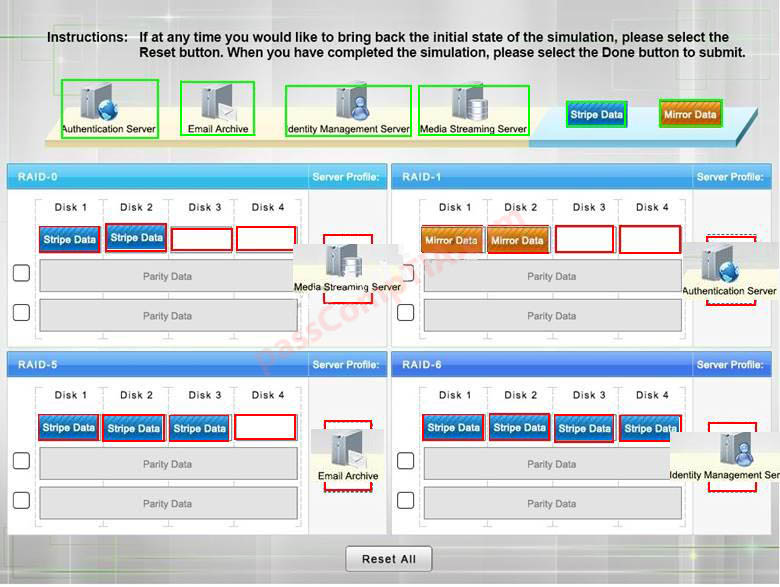 RAID-0 is known as striping. It is not a fault tolerant solution but does improve disk performance for read/write operations. Striping requires a minimum of two disks and does not use parity. RAID-0 can be used where performance is required over fault tolerance, such as a media streaming server.

RAID-1 is known as mirroring because the same data is written to two disks so that the two disks have identical data. This is a fault tolerant solution that halves the storage space. A minimum of two disks are used in mirroring and does not use parity. RAID-1 can be used where fault tolerance is required over performance, such as on an authentication server.

RAID-5 is a fault tolerant solution that uses parity and striping. A minimum of three disks are required for RAID-5 with one disk’s worth of space being used for parity information. However, the parity information is distributed across all the disks. RAID-5 can recover from a sing disk failure.

RAID-6 is a fault tolerant solution that uses dual parity and striping. A minimum of four disks are required for RAID-6. Dual parity allows RAID-6 to recover from the simultaneous failure of up to two disks. Critical data should be stored on a RAID-6 system.

When installing Hyper-V, which of the following is a hardware requirement?

Which of the following is an advantage of MOST tablets over laptops?

Which of the following is a business use case for desktop virtualization? (Select TWO).

A technician installs another IDE hard drive for more storage space and now when the workstation boots up it displays a message of ,,disk not found. Which of the following is the MOST likely cause?

A customer needs to run several virtual machines on their design workstation to work on cross platform software. Which of the following should be maximized to improve workstation performance? (Select TWO)