Which of the following techniques can be used to prevent the disclosure of system information resulting from arbitrary inputs when implemented properly?

Explanation:
Exception handling is an aspect of secure coding. When errors occur, the system should revert back to a secure state. This must be coded into the system by the programmer, and should capture errors and exceptions so that they could be handled by the application.

Explanation:
Group policy is used to manage Windows systems in a Windows network domain environment by means of a Group Policy Object (GPO). GPO’s include a number of settings related to credentials, which includes password expiration. Because Anne was not prompted to change her password, it could only mean that her user account was not added to the group policy.

Jane, an IT security technician, needs to create a way to secure company mobile devices. Which of the following BEST meets this need?

Explanation:
Screen-lock is a security feature that requires the user to enter a password after a short period of inactivity before they can access the system again. This feature ensures that if your device is left unattended or is lost or stolen, it will be difficult for anyone else to access your data or applications. Device encryption encrypts the data on the device. This feature ensures that the data on the device cannot be accessed in a useable form should the device be stolen. Remote wipe is the process of deleting data on a device in the event that the device is stolen. This is performed over remote connections such as the mobile phone service or the internet connection and helps ensure that sensitive data is not accessed by unauthorized people.

The security administrator notices a user logging into a corporate Unix server remotely as root. Which of the following actions should the administrator take?

Explanation:
Remote users log in to Unix or Linux servers by using SSH. Although SSH is secure, allowing remote access as root is a security risk.

One of the biggest security holes you could open on a Unix or Linux server is to allow directly logging in as root through SSH, because any cracker can attempt to brute force your root password and potentially get access to your system if they can figure out your password. It’s much better to have a separate account that you regularly use and simply sudo to root when necessary. You should disable root ssh access by editing /etc/ssh/sshd_config to contain: PermitRootLogin no

A security administrator must implement all requirements in the following corporate policy: Passwords shall be protected against offline password brute force attacks. Passwords shall be protected against online password brute force attacks. Which of the following technical controls must be implemented to enforce the corporate policy? (Select THREE).

The best defense against brute force attacks strong passwords. The following password policies will ensure that users have strong (difficult to guess) passwords:

D: Password complexity determines what characters a password should include. For example, you could require a password to contain uppercase and lowercase letters and numbers. This will ensure that passwords don’t consist of dictionary words which are easy to crack using brute force techniques.

Which of the following is the primary security concern when deploying a mobile device on a network?

Explanation:
Mobile devices, such as laptops, tablet computers, and smartphones, provide security challenges above those of desktop workstations, servers, and such in that they leave the office and this increases the odds of their theft which makes data security a real concern. At a bare minimum, the following security measures should be in place on mobile devices: Screen lock, Strong password, Device encryption, Remote Wipe or Sanitation, voice encryption, GPS tracking, Application control, storage segmentation, asses tracking and device access control.

Explanation:
Generally, the minimum password length is considered to be 8 upper and lowercase characters. The use of at least one non-alpha character like punctuation, special characters, or numbers, combined with the password length produces strong passwords. Strong passwords are produced by the combination of a password’s length and complexity.

Which of the following can be used to mitigate risk if a mobile device is lost?

Explanation:
Passwords are the most likely mechanism that can be used to mitigate risk when a mobile device is lost. A strong password would be more difficult to crack.

Drag the items on the left to show the different types of security for the shown devices. Not all fields need to be filled. Not all items need to be used. 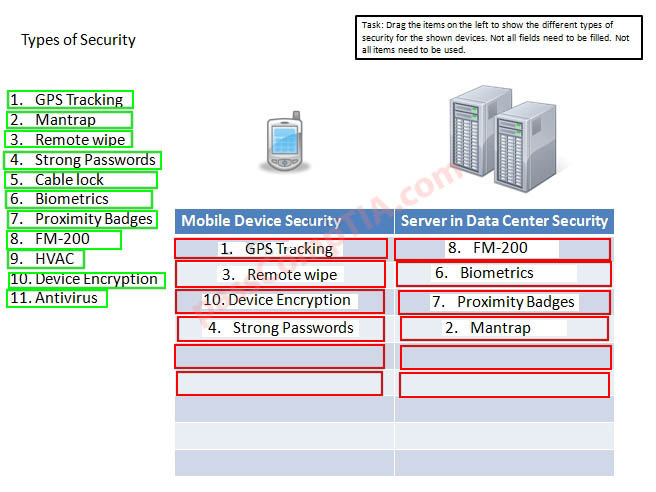 A Security administrator wants to implement strong security on the company smart phones and terminal servers located in the data center. Drag and Drop the applicable controls to each asset type.

Instructions: Controls can be used multiple times and not all placeholders needs to be filled. When you have completed the simulation, Please select Done to submit. 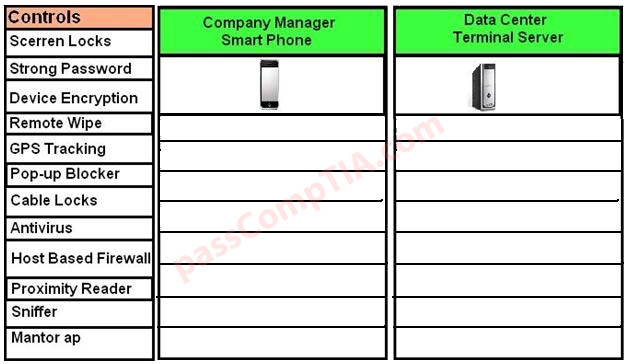 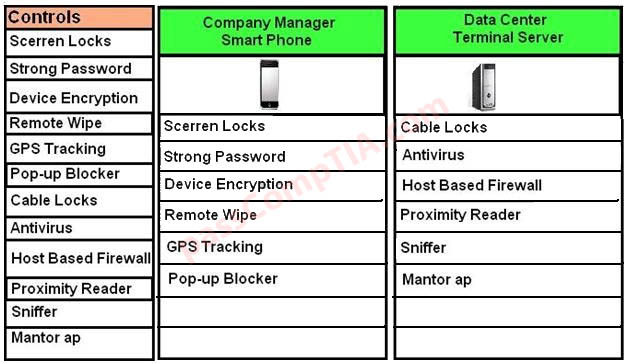 Proximity readers are used as part of physical barriers which makes it more appropriate to use on a center’s entrance to protect the terminal server.

Mentor app is an Apple application used for personal development and is best used on a mobile device such as a smart phone.

Remote wipe is an application that can be used on devices that are stolen to keep data safe. It is basically a command to a phone that will remotely clear the data on that phone. This process is known as a remote wipe, and it is intended to be used if the phone is stolen or going to another user.

Should a device be stolen, GPS (Global Positioning System) tracking can be used to identify its location and allow authorities to find it – thus best used on a smart phone.

Screen Lock is where the display should be configured to time out after a short period of inactivity and the screen locked with a password. To be able to access the system again, the user must provide the password. After a certain number of attempts, the user should not be allowed to attempt any additional logons; this is called lockout – thus best used on a smart phone.

Strong Password since passwords are always important, but even more so when you consider that the device could be stolen and in the possession of someone who has unlimited access and time to try various values – thus best use strong passwords on a smartphone as it can be stolen more easily than a terminal server in a data center.

Device Encryption- Data should be encrypted on the device so that if it does fall into the wrong hands, it cannot be accessed in a usable form without the correct passwords. It is recommended to you use Trusted Platform Module (TPM) for all mobile devices where possible.

Use pop-up blockers. Not only are pop-ups irritating, but they are also a security threat. Pop-ups (including pop-unders) represent unwanted programs running on the system, and they can jeopardize the system’s well-being. This will be more effective on a mobile device rather than a terminal server.

Use host-based firewalls. A firewall is the first line of defense against attackers and malware. Almost every current operating system includes a firewall, and most are turned on by Default- thus best used on a Data Center Terminal Server.